When I first heard about San Pedro de Atacama, I immediately thought back to all the road trips I’ve done in Australia where being totally free in all that open space is what it’s all about. And I knew I wanted that freedom when visiting San Pedro de Atacama which essentially meant I didn’t want to take tours.

Most blog posts I read spoke of how you can take this tour and that and it’s all relatively cheap and easy. And that’s true. But if you’re a person who values freedom and tries to avoid crowds, you simply have to try and visit the Atacama in a different way. 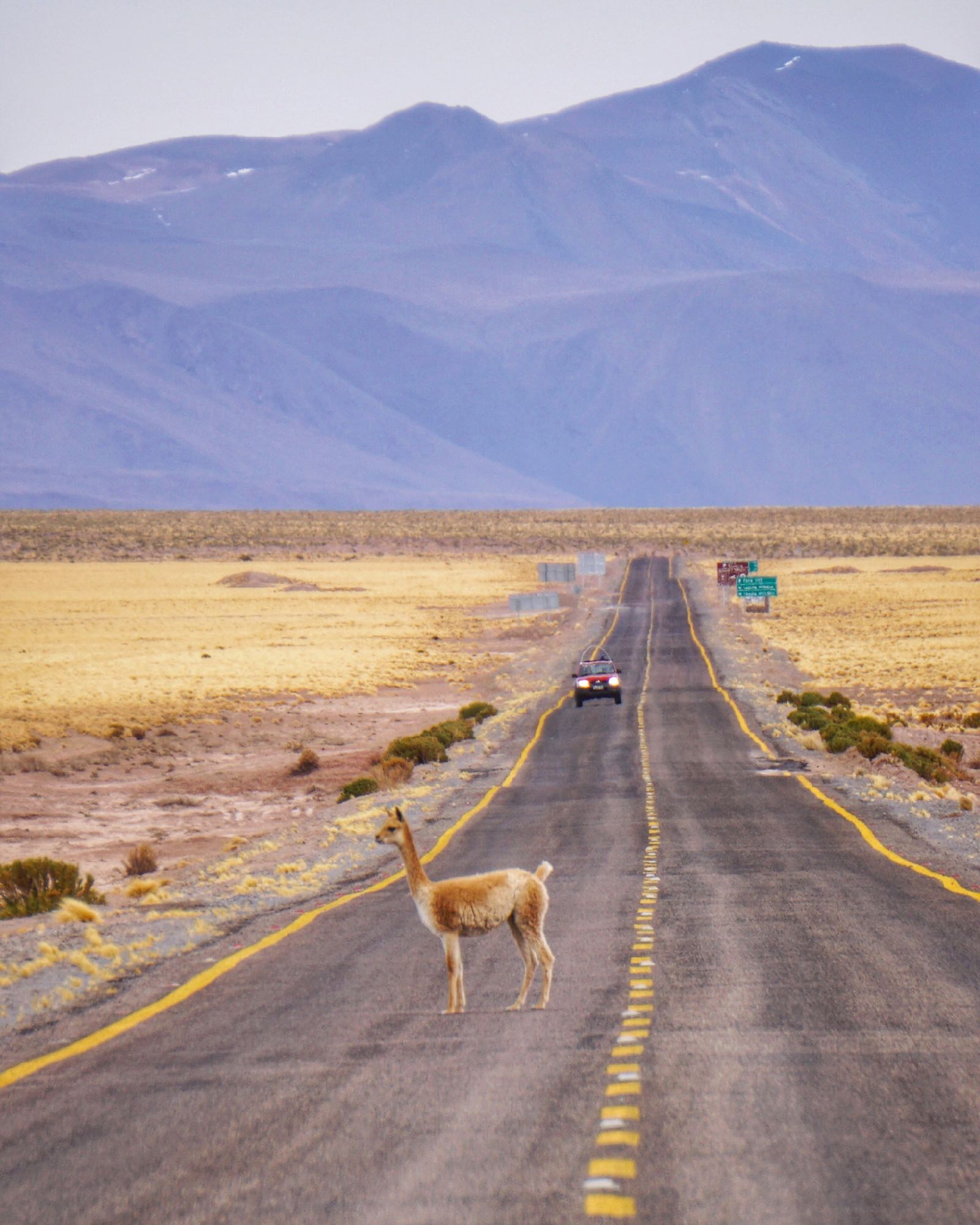 I hired a car for 4 days and it was the best decision, but not everything went as planned and I would have done a couple of things differently if I knew what was going to happen.

The first thing you need to know is that people tend to hire their cars in the large town of Calama rather than San Pedro de Atacama. Calama is 100km and 1hr from San Pedro and it’s where you’ll arrive by bus or plane as it’s fairly major hub.

I checked quite a few rental car companies as well as Holiday Autos (they’re usually really cool as all terms and conditions are laid out and they usually include insurance) and ended up booking with Budget at Calama airport via Holiday Autos because it was cheaper that going directly with Budget. I purposely chose not to purchase extra insurance as I always do, but I kind of regret that now as I’ll explain later.

A lot of forums I read stated that you absolutely have to get a 4wd vehicle as 2wd sedans just can’t do these roads. I got a small 2wd car and it was perfect for visiting Laguna Tebinquiche, Laguna Chaxa and Lagunas Miscanti & Miñiques. I also tried to visit Salar de Tara, but was driven back by an immense sand storm which threatened to sandblast the paint on the car to bare metal. At an altitude of about 4800m, I decided to turn the car around as the wind was moving faster than the car and the car was travelling at 100km/h.

It was scary, intense and something even a 4wd wouldn’t cope with. If the weather had been better, a 4wd would probably have been a wise choice because this particular route requires off road travel, even though it’s mild. 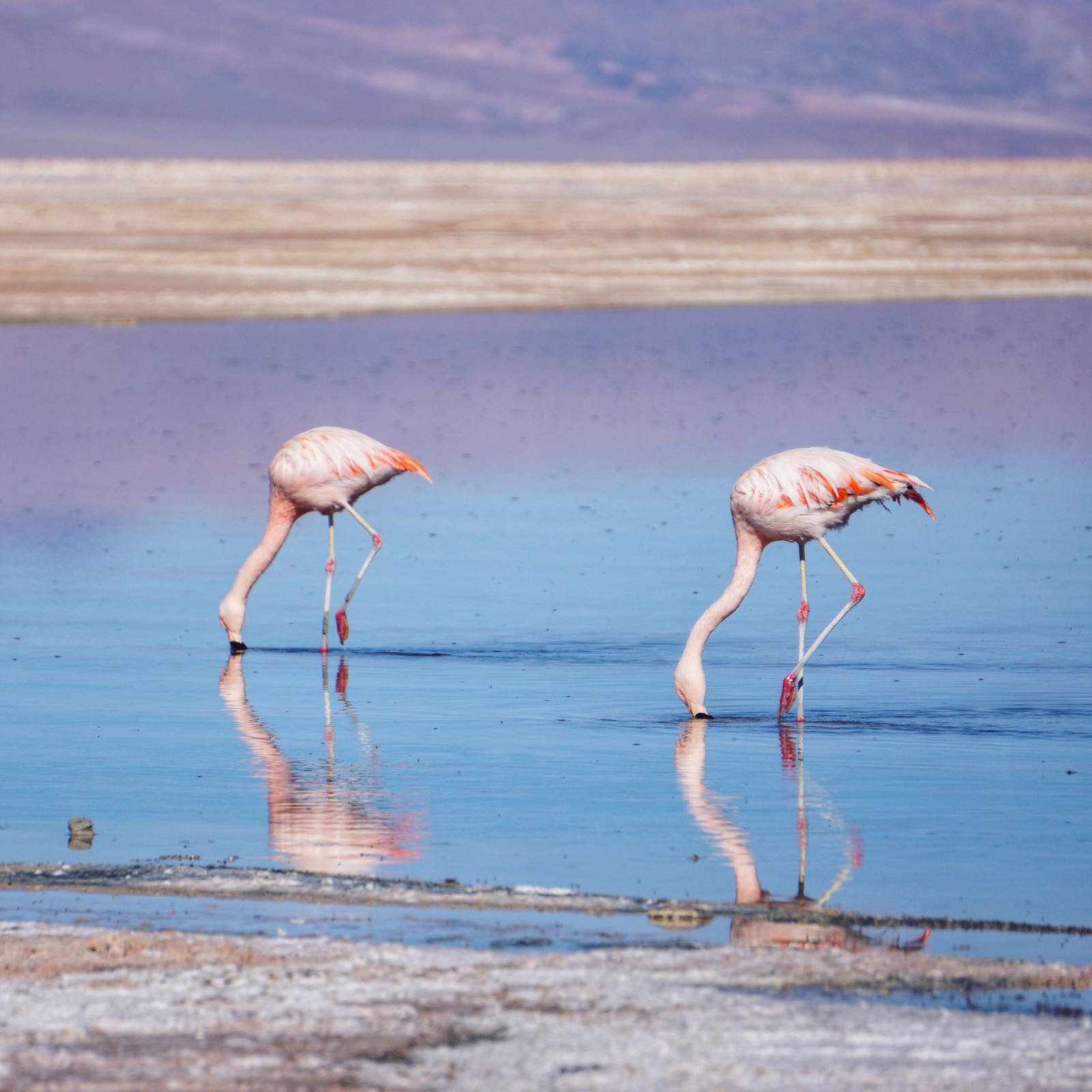 The other place I wanted to visit was the geyser, but I just didn’t think I should put the small car through the pain of travelling along that treacherous road. Again, if you must visit the geyser independently, hire a 4wd. If you don’t have enough money for a 4wd, that’s ok. Just visit the lagunas I visited and you will love it.

After visiting Lagunas Tebinquiche & Chaxa, I decided to make a loop around the Salar. Why? Because up until that point the dirt roads had been really quite good. So I commenced the massive journey around the Salar and it was a poor poor decision. The first problem was that the road deteriorated quite a lot when I got to the other side of the Salar. The road was filled with larger rocks and even though I was driving fast, the car was burning through petrol. This was probably due in part to me having a flat tyre for about 100km that I didn’t know about. Eep!

After I got onto the main road, I smashed into a large pot hole (pictured: more like a crater — seriously) and the wheel with the flat tyre buckled. So that night and the next day were stress filled days of trying to get either a replacement wheel (really expensive because it was a custom alloy wheel) or get the wheel repaired. 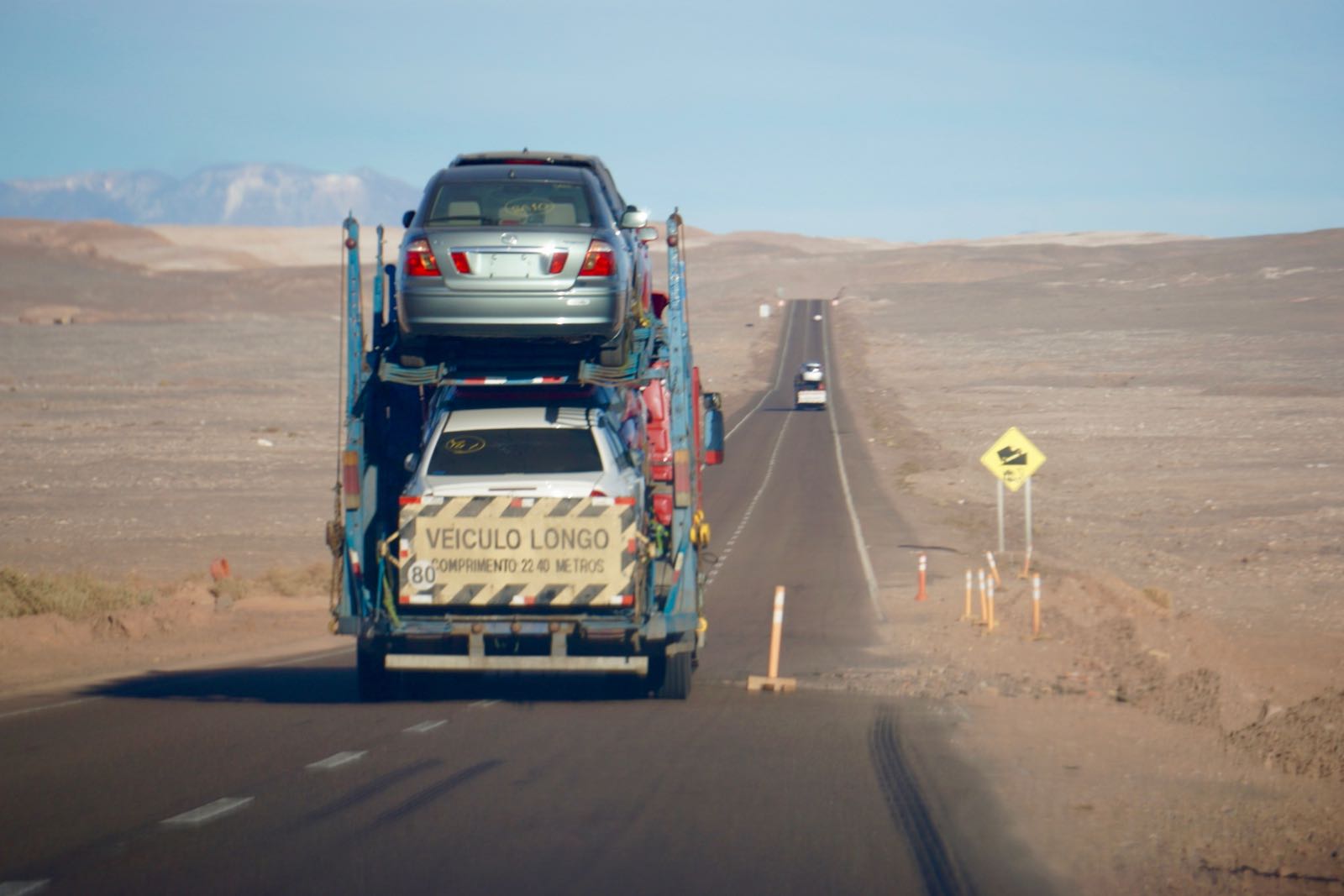 After visiting about 5 shops, I finally found someone who said he would attempt to repair the wheel. 20,000 pesos later and I was on my way. That day was wasted and Budget refused to help fix the wheel. They just insisted it was my responsibility which sucks really… I would have appreciated them facilitating the repair and me paying for it, but that didn’t happen.

If I had insurance with them, I’m not sure they would have treated me any differently. The only thing different would be that they wouldn’t charge me for the replacement wheel if I brought the car back with the wheel broken AT THE END OF THE RENTAL. Which is no help when you need the car fixed. 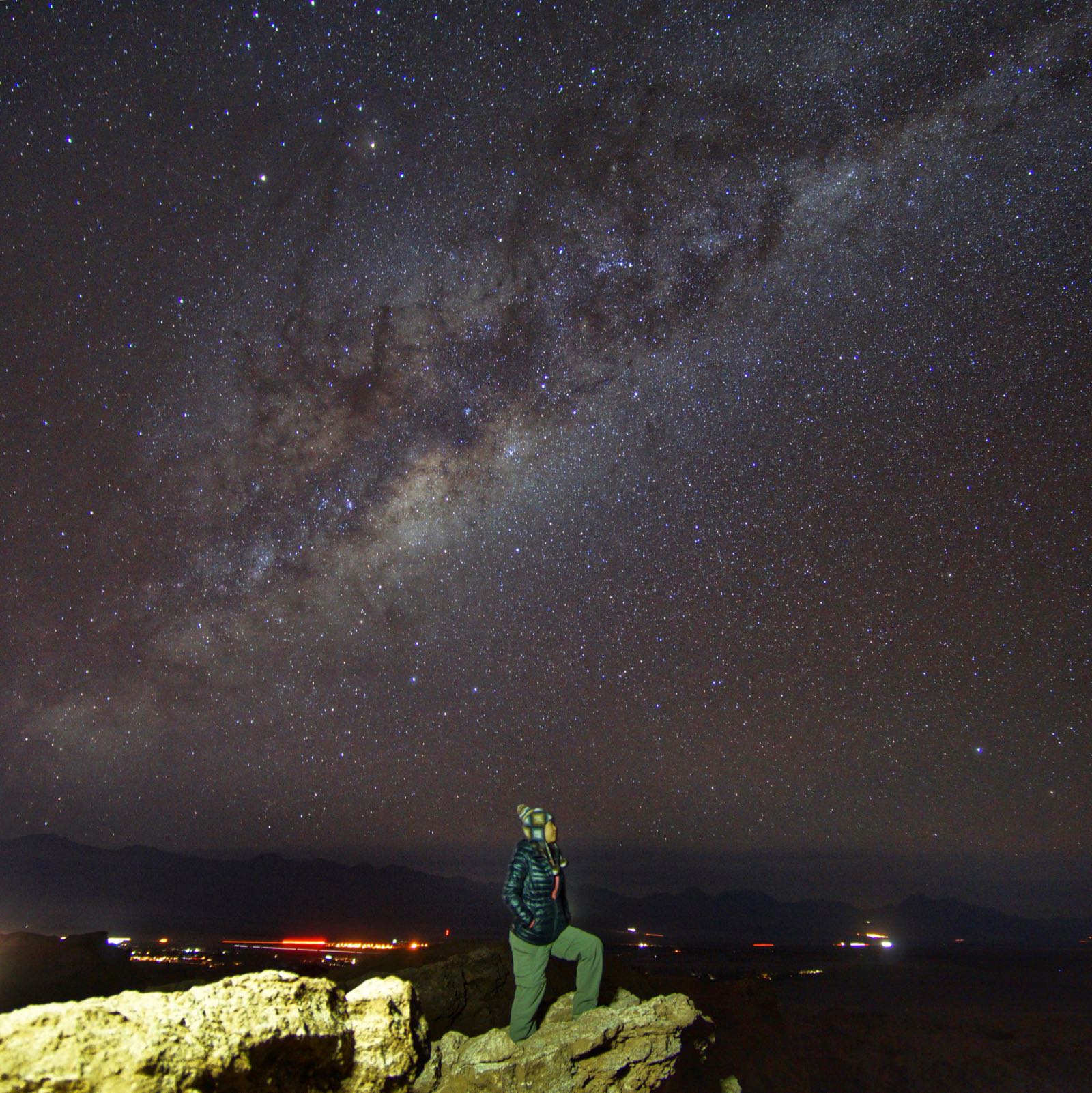 Whatever the case, I kind of wished I had insurance at that time because the potential cost for me was massive. Also, the sand storm incident was scary and insurance would have eased my mind a little. I’m not a big advocate for car insurance generally, but I think the conditions in the Atacama can be so extreme that it’s wise to get insurance even though it’s expensive.

Check the current price of rentals on Holiday Autos. 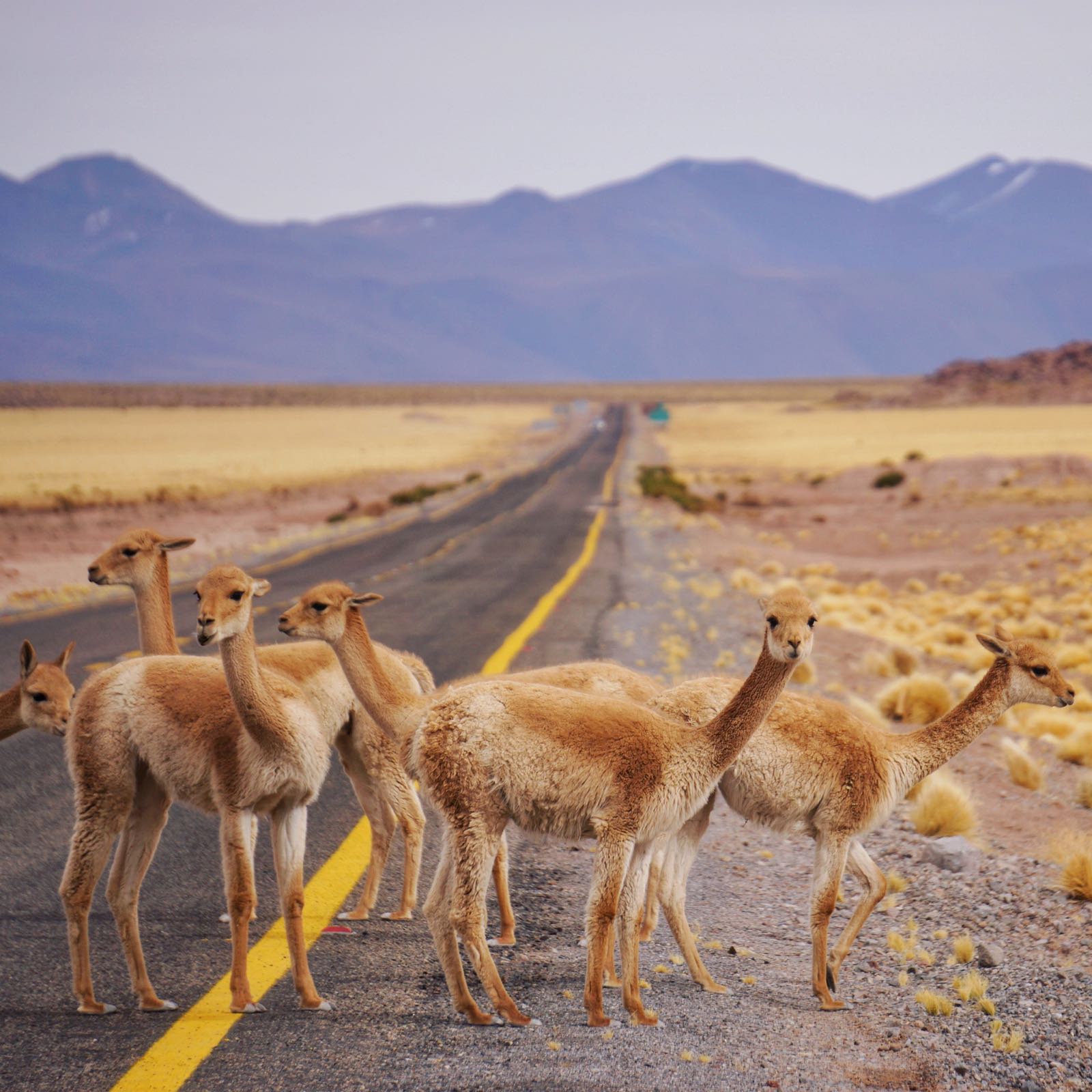 How to know where to go

So how did I know where to go in the Atacama? Well, everything is signposted so well and the tourists maps are actually quite good. On top of that, most of the roads are paved and very good and most of the dirt roads are quite flat. There were a few dirt roads which were really rutted, but they were no problem for any car – just take it really slowly. 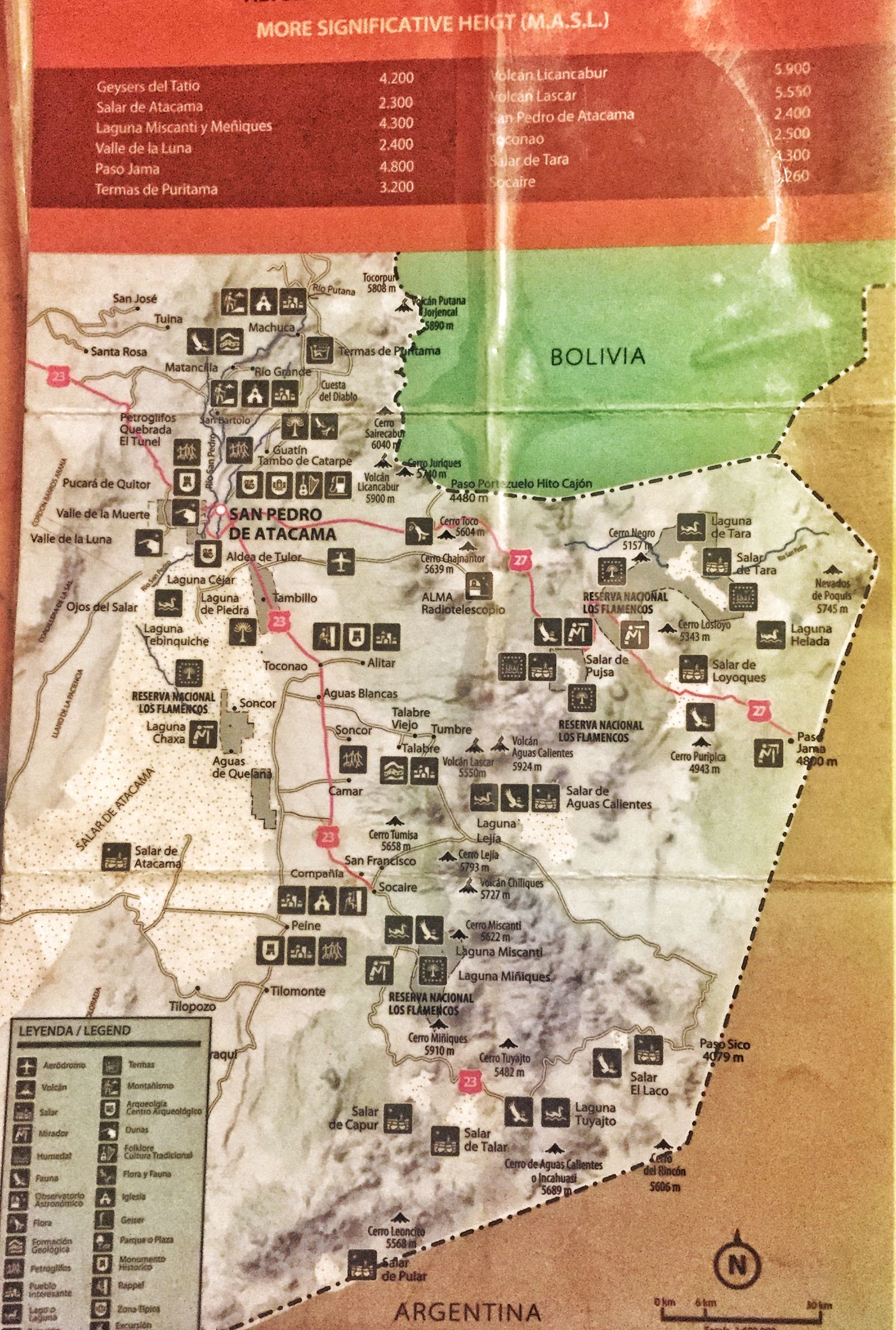 Where to stay in San Pedro de Atacama

We stayed at a lovely place called Hostal Desert. Some of the complaints I read online talked about how far from the centre of town it is — a 15 minute walk. But the hostal was so amazing that we didn’t care about the distance from town particularly because we cooked most of our meals in their fully equipped kitchen. 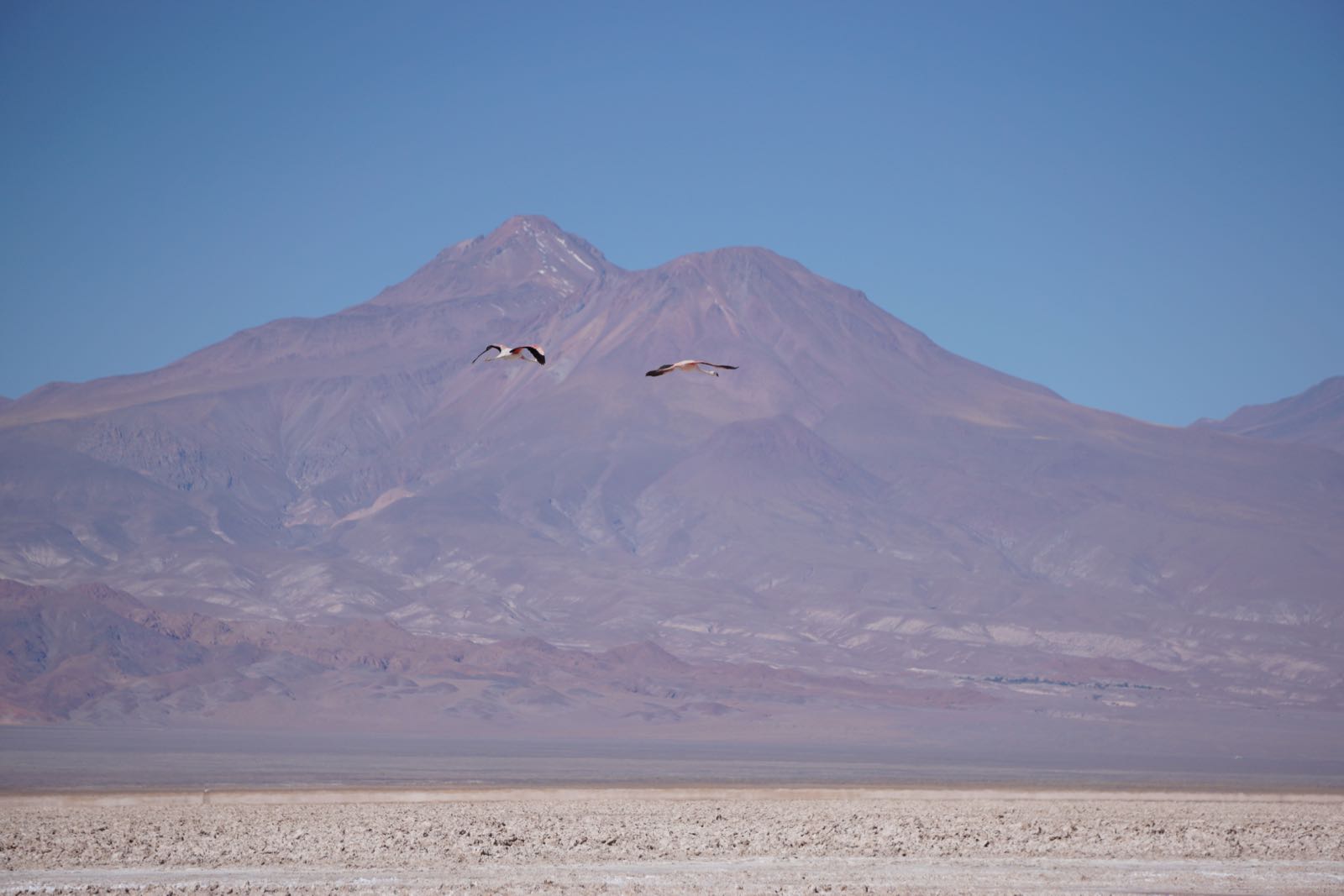 The one night we ate pizza in town we drove. No problem! In fact, I didn’t really like the vibe in the centre of town and I’m glad we stayed a little bit out of the centre. Too many hippies, overly confident guide types and touristy shops and restaurants where prices are exorbitant. 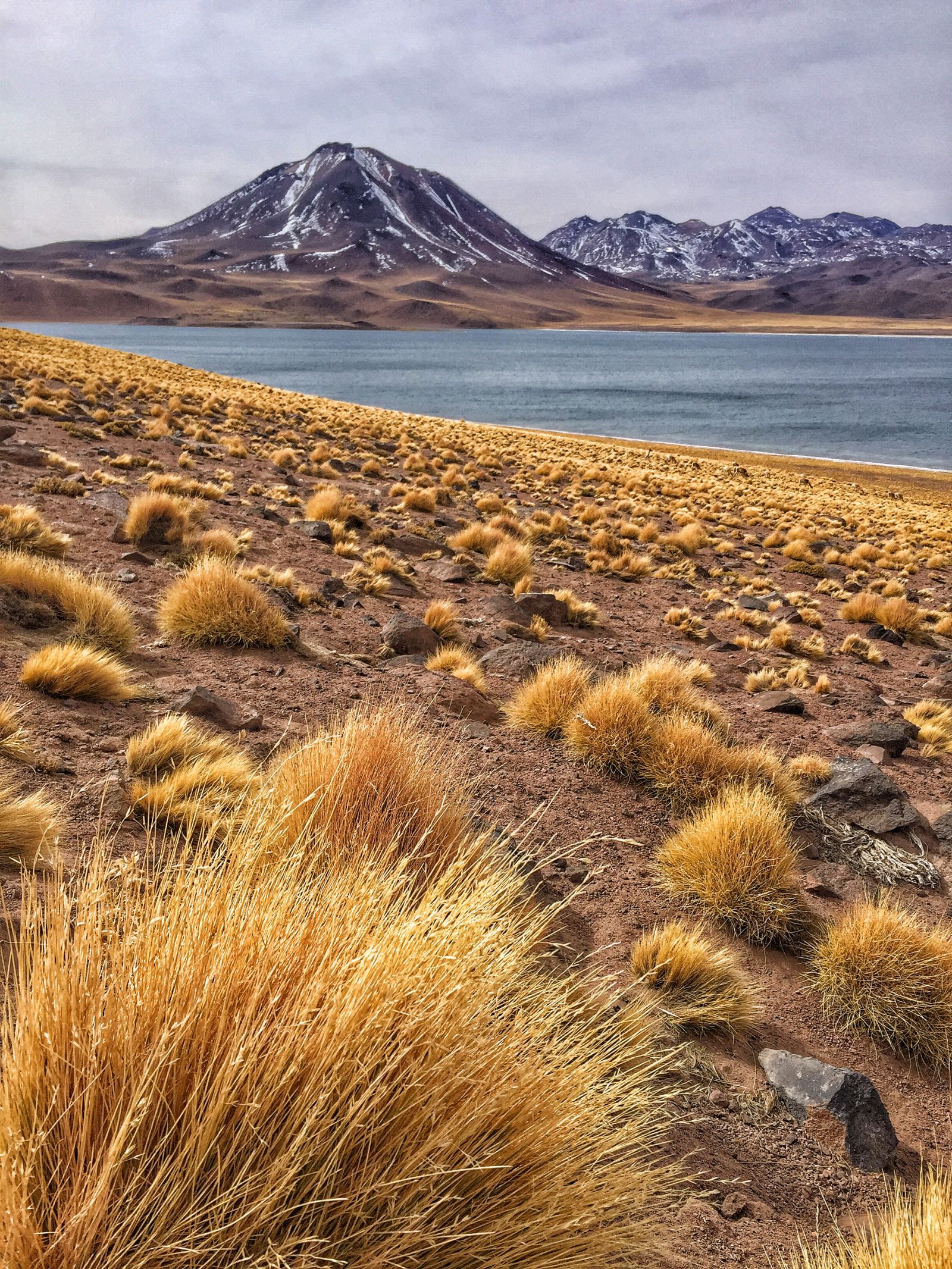 I paid $65 per night at Hostal Desert which included a pretty good breakfast –> Check the current price on Agoda or Booking.com

I really enjoyed my time in San Pedro de Atacama. It’s such an otherworldly place and it’s this uniqueness that makes a trip so incredible. I really loved travelling there independently and renting a car. Made the whole place that much more special.

Any questions? Let me know!

by any chance ,do you have any suggested itinerary for 3 days? i am planning on doing myself with a rental,,thanks in advance.

Well, I can say you need to be careful about the winds near the large volcano. Once you reach a high altitude, it’s scary stuff and you may have difficulties with the vehicle getting sand blasted and you having to pay for the damage. Firstly, pick up a tourist map at your accommodation. I would recommend hitting up the nearby lakes filled with flamingoes, also laguna miscanti (incredible), Valle de Luna at sunset (night time is spectacular). But there are a bunch of things on Route 27 that are recommended, but where I had problems with the sand and wind.

So in short, spend a couple of days exploring everything along route 23 including the great little towns. The next day go up route 27 next to the volcano and hope that it’s not windy!