Kaohsiung is a far more southerly town than either Taipei or Taichung and because of that, the weather is usually warmer than its more northerly neighbours. That makes the city and especially the beach areas really pleasant to walk around. So what is there to do in Kaohsiung? Let’s get to it:

This isn’t really a tourist spot, but it’s an interesting place to come and visit nonetheless. So what is Formosa Boulevard? It’s actually just an underground station! But at one of the station exits there is an awesome stained glass dome which really does have to be seen to be believed. Designed by an Italian artist, it’s better know as the “dome of light” and has a diameter of 30 meters and is made up of 4500 individual glass panels.

If you happen to pass through the station on your travels around Kaohsiung, you’re bound to see people pointing their cameras upward trying to get a shot of the awesome artwork. For me, I got to see it multiple times because my hotel was literally next door. Better still, I was able to swing by later in the evening when the commuter crowd had died down.

As usual, you can’t get the feeling of a Taiwanese city without visiting its night markets.  Liuhe Night Market was located just a short walk from my hotel in Kaohsiung making it the perfect spot to go and grab a late night snack (I stayed at the Centre Hotel for $30 per night). When you read some of the reviews of this market online, some people claim it’s a simple tourist market and some claim it’s a good market to go and eat local food. For me, this really didn’t feel too touristy and a lot of the signs were still in Chinese… So maybe touristy if you’re Chinese, but not if you’re an English speaker.

I walked up and down the market a couple of times and it’s not really that big to be honest stretching only 1 full block. As usual, there are food carts on the left and right and in the middle there are tables and chairs where you can sit and eat your food.

Even though it’s an interesting market to walk around, I found it difficult to find a full meal here that took my fancy. I did, however, find the banana roti and black pepper bun which I wrote about in my post about food in Kaohsiung.

Now, this place is really cool and perhaps a highlight of your trip to Kaohsiung. Cijin Island is a large island a short 5 minute ferry ride from Kaohsiung where you’ll find lots of cool things to see and do. It’s an island with residents just like the mainland, but the infrastructure here is set up primarily for the local tourist crowd which gather here on the weekends.

So what is there along the beach on Cijin Island? Well, there are two main objects: a Giant Shell a a thing called the Rainbow Church. Apparently the giant shell is there because it’s next to the shell museum, but I had no interest in visiting a shell museum so I didn’t go inside.

The Rainbow Church actually isn’t a church. It’s just a bunch of colourful sticks representing an art installation which provides a good backdrop for some Instagram pics. There are 2 installations next to each other: one square shaped and the other similar to a chapel which you might see on the beach in somewhere like Bali. And of course they’re both full of colour hence the name “Rainbow”. Simple, but worth visiting!

Getting a photo here is free, but there are sometimes queues of people wanting to take photos. When I arrived, there was no queue at all so we had the place to ourselves for a good 10 minutes. But then a bunch of people turned up out of nowhere and started lining up to get a shot. And they were polite! No pushing and shoving and standing in other people’s photos. That’s one of the beauties of Taiwan. The people are so damned polite!

Aside from the spots alongside the beach, there are a bunch of other interesting spots around Cijin such as Cijin Star Tunnel, Cihou Lighthouse, Cihou Fort, Tianhou Temple, flower park near the beach and Windpower Park. Tip: prepare one full day if you want to explore Cijin Island properly as there is lots to see and do.

How to get to Cijin Island: Take metro Orange Line, get off at Sizihwan (R01), take exit 1, turn left and walk about 10 minutes to the ferry port. Buy the ferry ticket on the spot. (NT$25 per person, use exact money). Ferries depart every 10 to 15 minutes.

Pier 2 is an art park/district located in and around old train warehouses which are no longer used for their original purpose and is now claimed by local artists where they display their works of art.

The area is quite large and some of the installations are huge such as the large suitcase shown in the photo below which is made from old rail carriages. They also have houses which are designed so that they appear upside down, but when I was there they were in the process of renovation. Aside from the outdoor installations, there are a few old warehouses where they conduct exhibitions which usually require payment to enter.

Entry to the park itself is free and well worth a visit because there are lots of cool things to see. In other words, lots of instagrammable spots. A word of warning that busloads of tour groups tend to buzz through every now and then causing the place to become extremely crowded and noisy. But not long after they arrive, they depart again.

How to get here: Take metro Orange Line and get off at Yanchengpu station,  walk 5 minutes to Pier 2 Art District.

As the name suggest, Lotus Pond is famous for its lotus plants. But don’t think of a small pond with a few lotuses in it. No… this is actually a massive lake filled with wildlife, temples and also the odd lotus. Opened in 1951, this lake is always busy with tourists coming to check out the various temples.

One of the highlights of the Lotus Pond is the pair of towers known as the Dragon and Tiger Pagodas with one of the pagodas having an entrance in the shape of a dragon and the other having an entrance in the shape of a tiger. What’s cool is that there is a rule where you have to enter through the dragon and exit through the tiger. The reason being, according to Chinese culture, that if you enter in the correct direction, you’ll draw good luck to yourself. Seems too good to be true!

Each pagoda is 7 storeys tall and contains a spiral staircase in the centre allowing you to reach the top where the views are pretty special. And there are quite a few other temples around the lake as well such as the Spring and Autumn Pavilions, Confucius Temple and a few palaces. If you want to visit them all, you’re going to need quite a few hours as the distance between them is quite far and will require more or less a full circuit of the lake on foot.

How to get here: Take the train in the direction of Zuoying (where the high speed rail station of Kaohsiung is), get off at Zuoying and walk 20 minutes to the Lotus Pond. The other option if you’re too lazy to walk is to catch a bus: Red Line #35 from in front of Zuoying station which drops you off at the twin pagodas..

This is my favourite night market in Kaohsiung. Unfortunately it was raining really hard when I was there and I wasn’t able to enjoy it is as much as I would have liked. Ruifeng Night Market is a night market focused primarily on food.

Ruifeng Night Market isn’t like many other night markets in Taiwan where they block off a street and set up stalls — it’s more like a dedicated fixed market which makes it feel a little bit different to many other night markets you might have been to. Each stall has its own roof so that when it rains, you get wet half the time and the other half you’re safe under someone’s stall. But move in the wrong direction and you’ll catch the deluge running off the canopy — they could probably fix this.

A few of the foods I tried: grilled marinated chicken, taro milk (made from freshly steamed taro and then blended to order), deep fried octopus and bubble tea filled toast! So if you can, try and visit this particular night market because the food is really interesting. Just make sure you arrive on an empty stomach.

How to get here: Take train route Red Line and get off at Kaohsiung Arena Station, walk 3 minutes to Ruifeng Night Market. 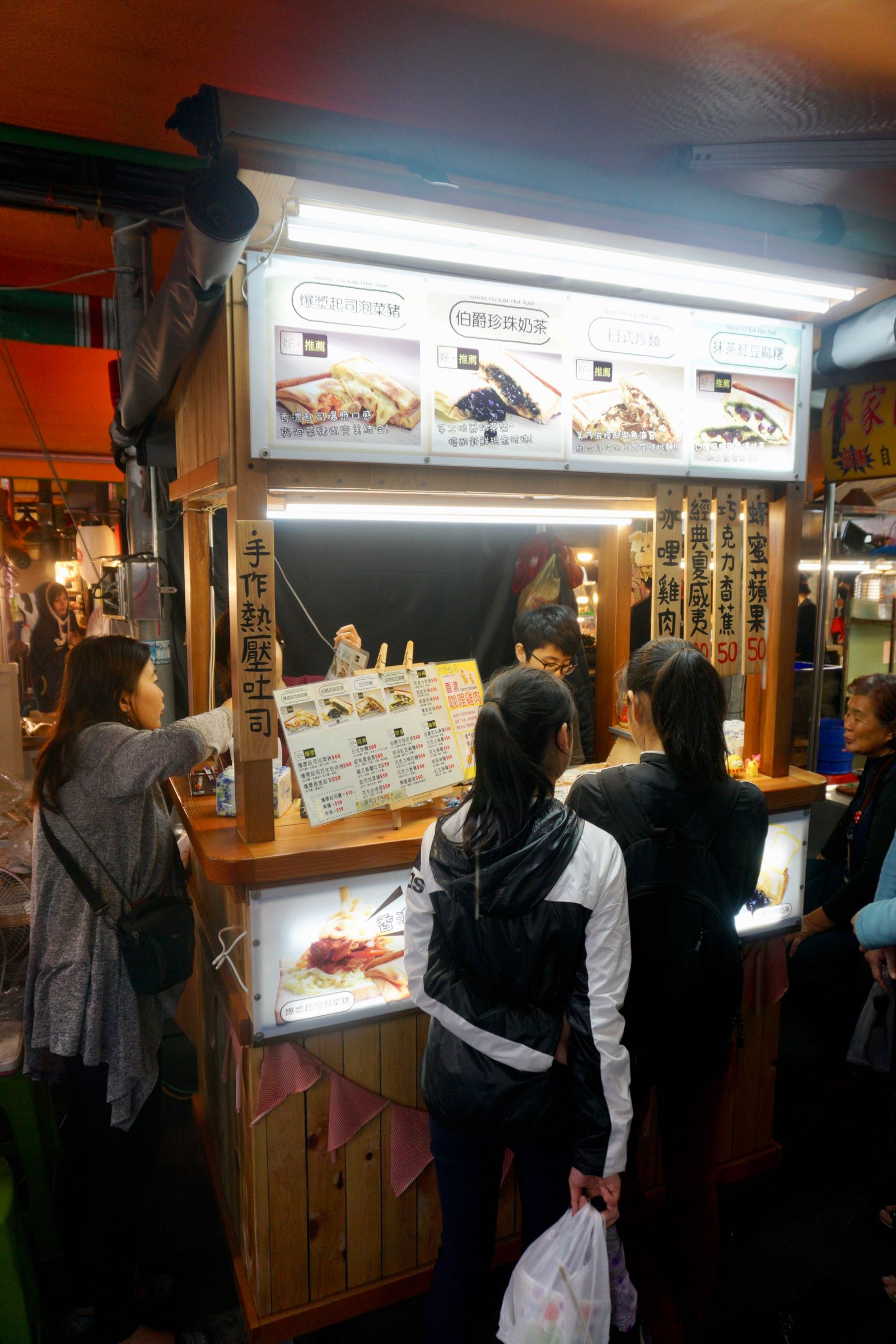 If you have more time in Kaohsiung, there’s actually plenty more to explore around Kaohsiung such as Kenting National Park, but you’re probably going to need a car and driver to do it. FYI, there are direct flights from Singapore to Kaohsiung these days meaning you don’t even have to go to Taipei at all if you don’t want to (check airfares here). Or better still, fly into Kaohsiung and fly out of Taipei or vice versa. Whatever the case, Kaohsiung is definitely worth a visit if you’re going to Taiwan.

PS If you’re looking for a place to stay, I stayed at the extremely good value Centre hotel for about $30 per night. Check prices here!