When I booked tickets to Taiwan, I had no idea about the country or how much time I’d need to explore it. In the end I just picked a figure of 3 weeks and started building an itinerary around that. I pulled out a map and looked for cities outside of Taipei and came up with Taichung, Khaosiung and Hualien. Taichung was the first city I visited after Taipei and was I surprised to find that there were lots of cool things to do.

I went to Taichung on a local train rather high speed rail (HSR) because last minute tickets on the HSR were expensive! The 4 hour journey is perfectly comfortable and not too slow for such a long trip — it’s that the HSR is so fast! 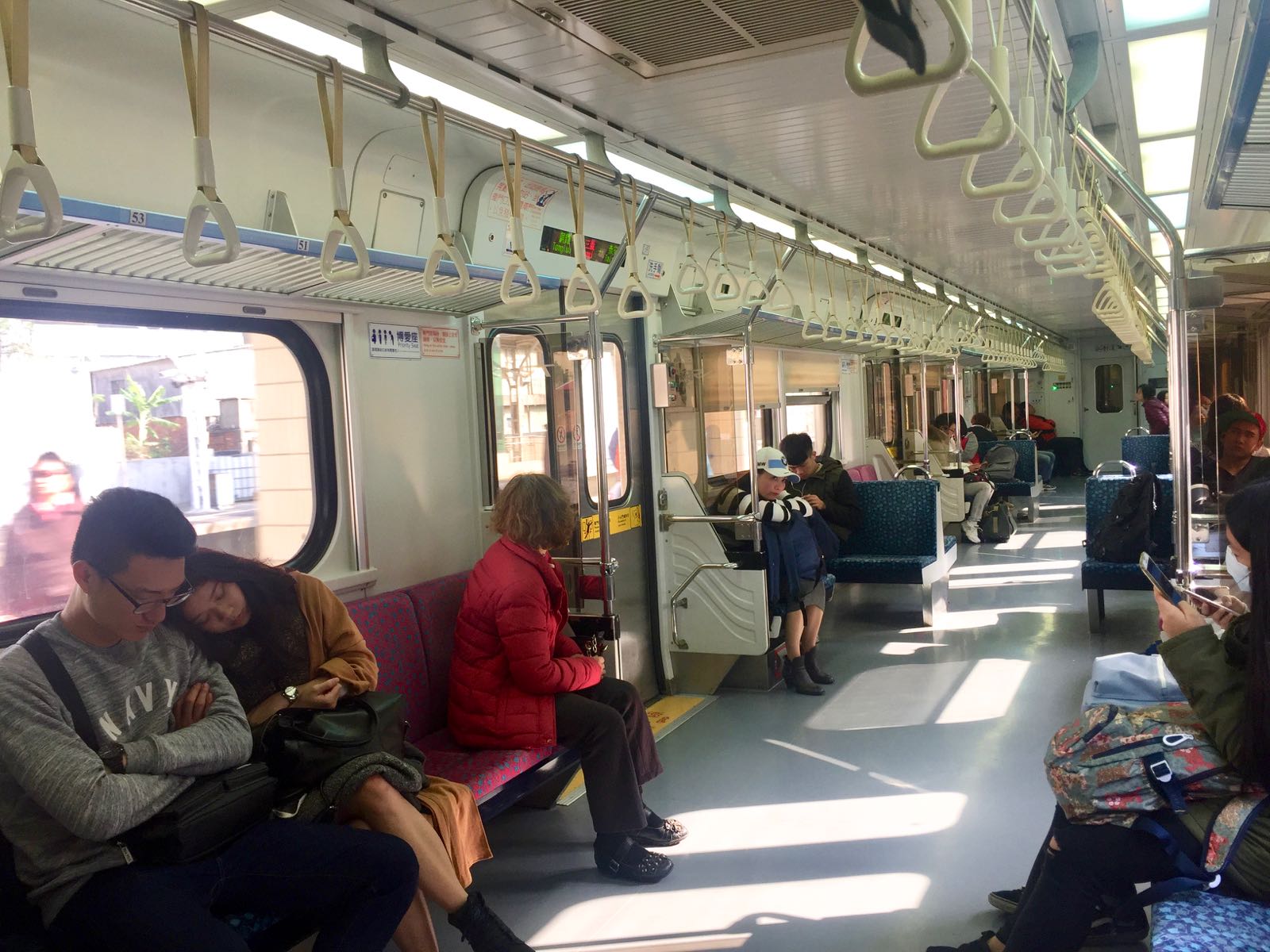 Taipei city is modern and sophisticated with everything  organised. In comparison, Taichung immediately feels more hectic, rustic and full of character. I spent 3 nights in Taichung and while there aren’t any headline tourist attractions like Taipei 101, it is an enjoyable city to wander around and take in the sights.

In almost every city in Taiwan, there are incredibly popular night markets and Taichung is no different. Feng Chia Night Market is a crowded and vibrant market due to its proximity to the nearby university. As with most Taiwanese night markets, an assortment of stalls, food carts and traditional shops combine to keep you occupied and your belly full. In addition to food, Feng Chia Night Market also has lots of clothes, shoes and trinkets.

Taichung Park is just one of many public parks in Taichung. It’s a large clean park with a bunch of paths winding their way around a picturesque lake and at night, it really comes to life with a bunch of cool lighting features. It’s possible to rent a small boat and row yourself around the lake as many locals do, particularly on weekends, but it’s not something I tried. 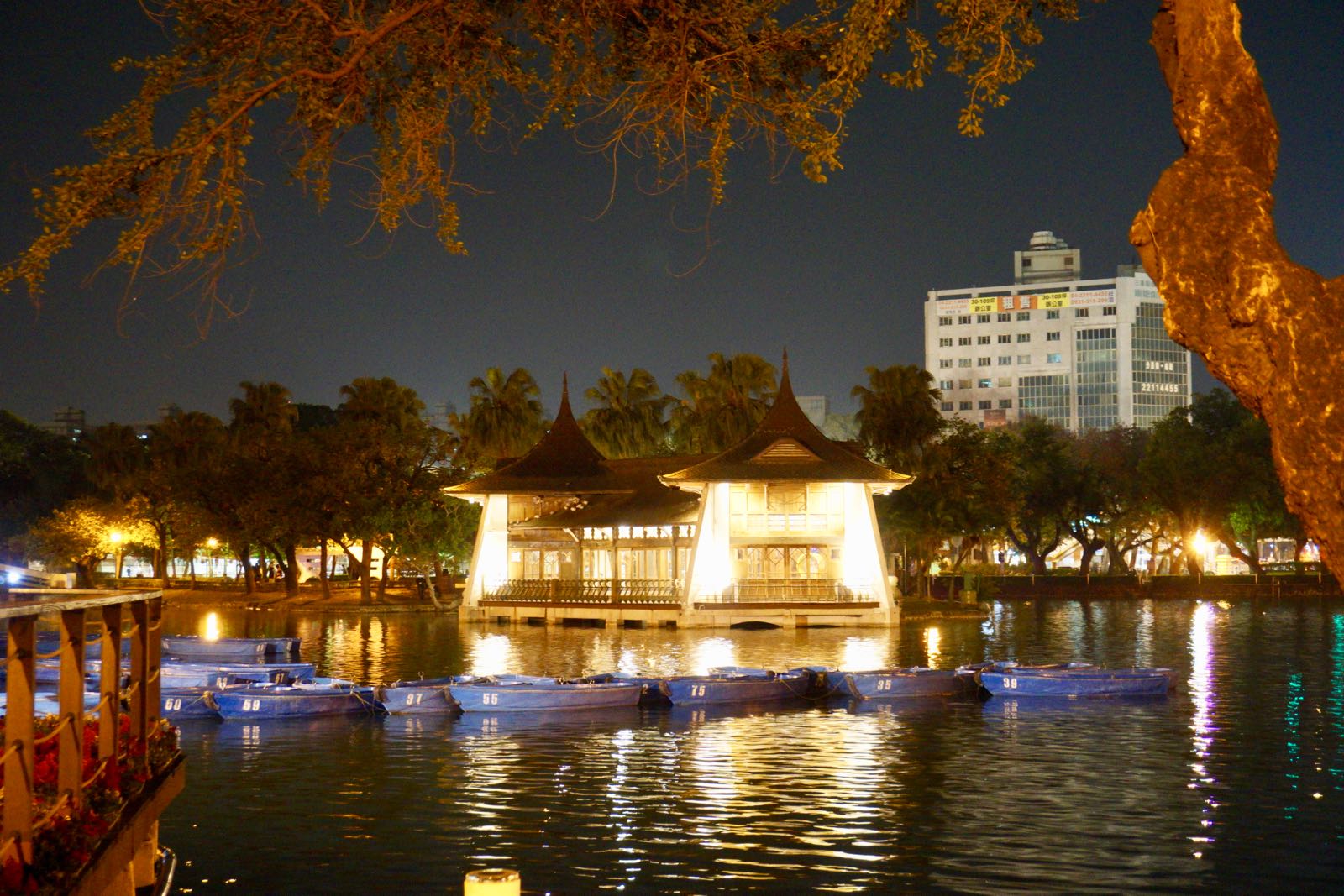 Rainbow village is a small cluster of brightly coloured buildings famous for their murals and quirky residents selling various arty knick-knacks. Originally part of a military establishment, the buildings eventually fell into disrepair at which point large brightly colour murals were painted on their outside. 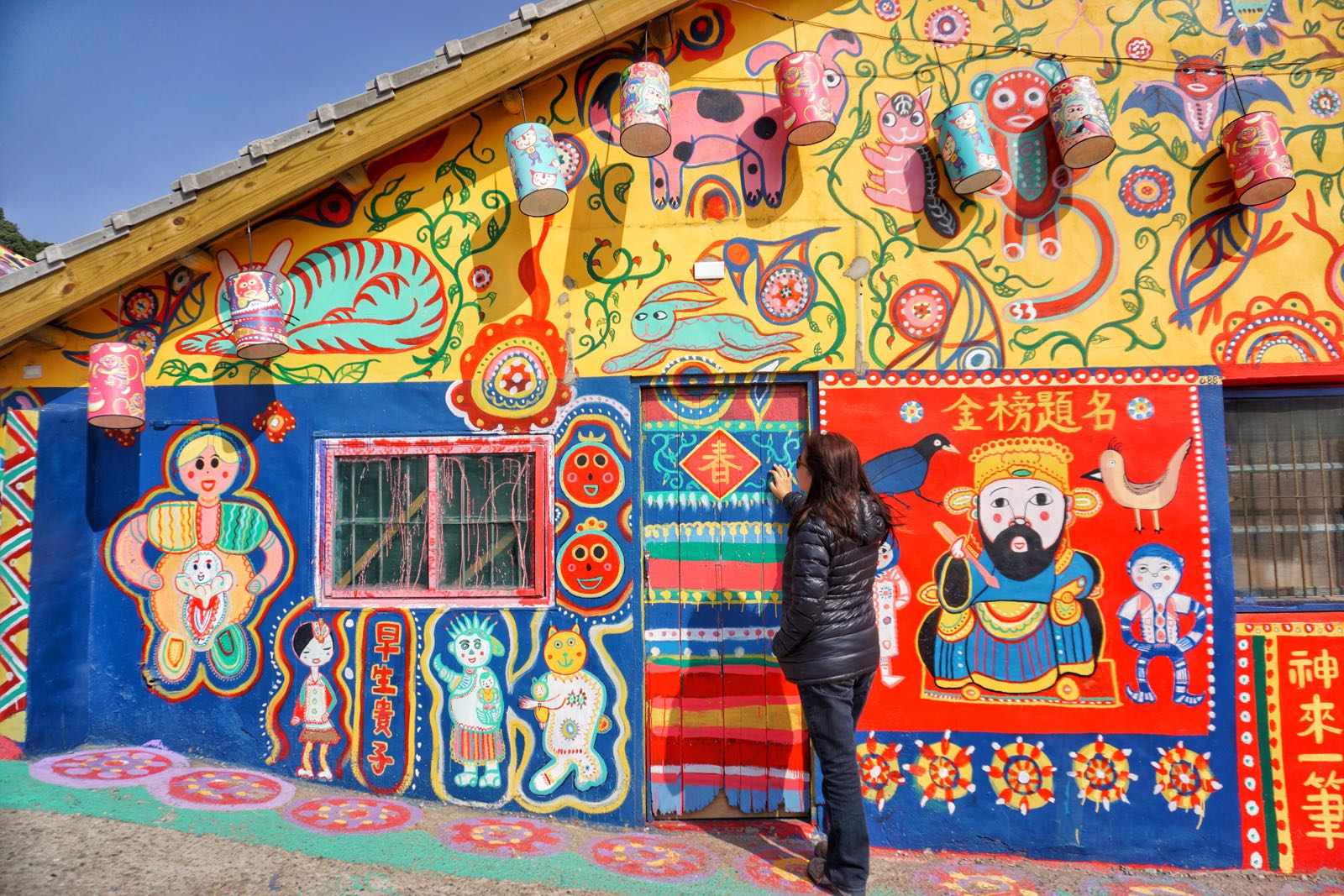 When I visited, some of the houses were being renovated so not all the alleys could be explored. The artist who painted the walls is still there and sits in the house selling souvenirs. Most people will come here, take a few photos and leave again within about half an hour. The best way to get her is by bus — directions available on google maps.

I actually stumbled upon Maple Garden by chance when changing bus on the way to the Rainbow Village and I’m really glad I found it! The garden is modern with futuristic roofs and bridges that curl and wind their way down to a lake surrounded by green grass and plenty of trees. There’s a cafe/restaurant within the park and it’s a pleasant place to spend a bit of time during the day. 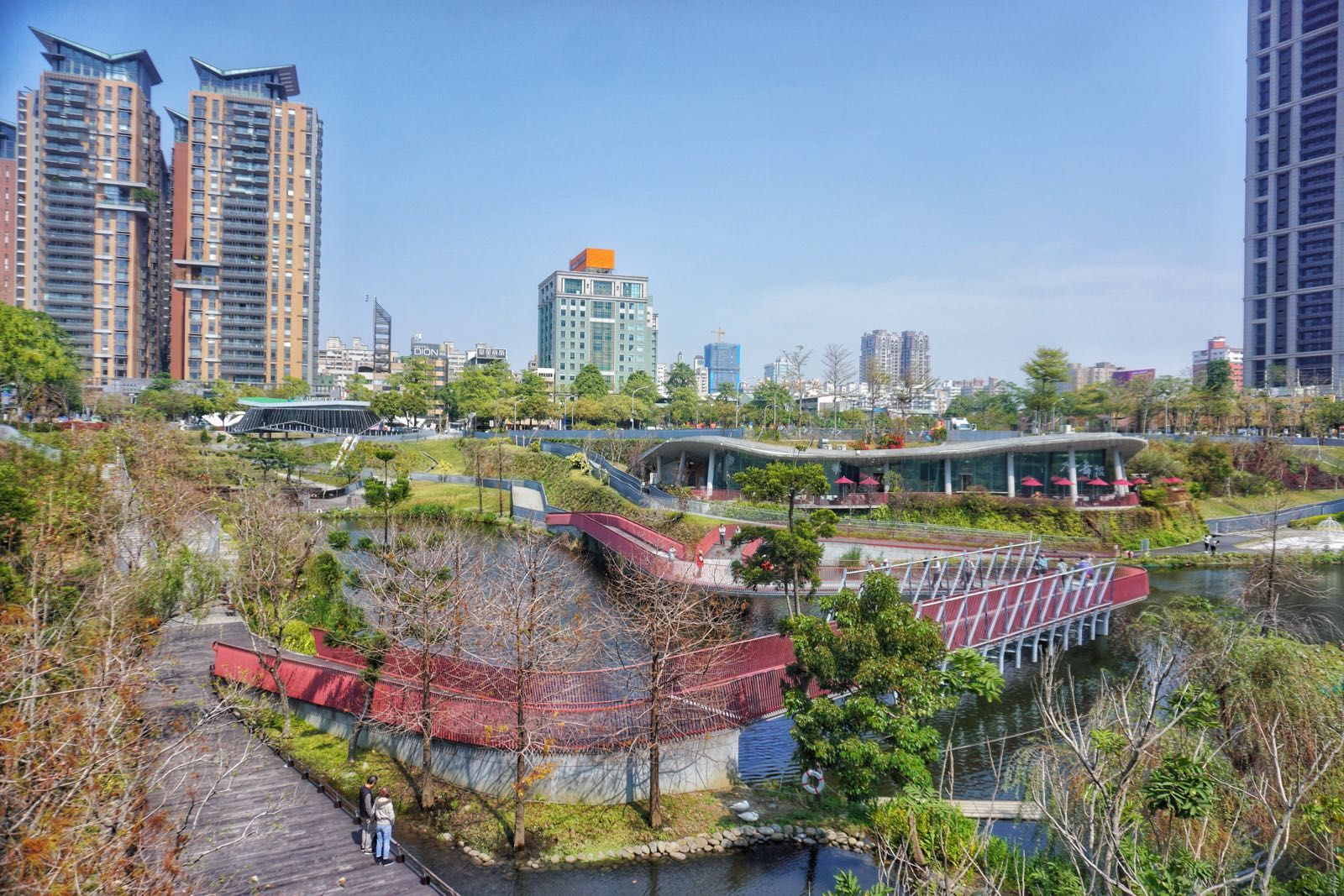 Like bubble tea / pearl tea? Well it turns out pearl milk tea is originally from Taichung. In 1983 Chun Shui Tang started this worldwide phenomenon by adding pearls to their milk tea. Since then, bubble milk tea began throughout Taiwan and of course around the world.

Chun Shui Tang already has about 40 branches all over Taiwan, but if you want to visit the first location, you can stop by Chun Shui Tang in Siwei Street, Taichung. They not only serve bubble tea, they also dish up a range of food from snack to main meals — the snacks I had were tasty! It’s possible you’ll have to line up to get a seat, but it’s worth a visit anyway.

Actually, City Hall is not a tourist attraction. But for those who like architecture, this building is quite interesting because it was built in the Japanese colonial period in a Fench colonial style. Weird! Looks straight out of Europe!

For those who like wandering around markets in Asia, Second Market is quite an interesting one. This undercover market houses the typical range of fresh meat, fruit and vegetables but also some awesome hole in the wall eateries. Most are open in the morning and close late in the afternoon, so it’s best to head here for breakfast. Knowing which eatery to visit is easy — just visit one with lots of customers. I highly recommend Three Generations Yee Mien.

If you’ve been to Seoul may know the name Cheonggyecheon Stream, it’s a river that flows through the middle of town with banks which are paved so that people can sit around hanging out with friends. Some areas along the Liuchuan River in Taichung are also made that way and in the afternoon many people bring children to play around on the edge of the clean and neat river. In addition to a pleasant walking path, there are plenty of trees and flowers and loads of grass. 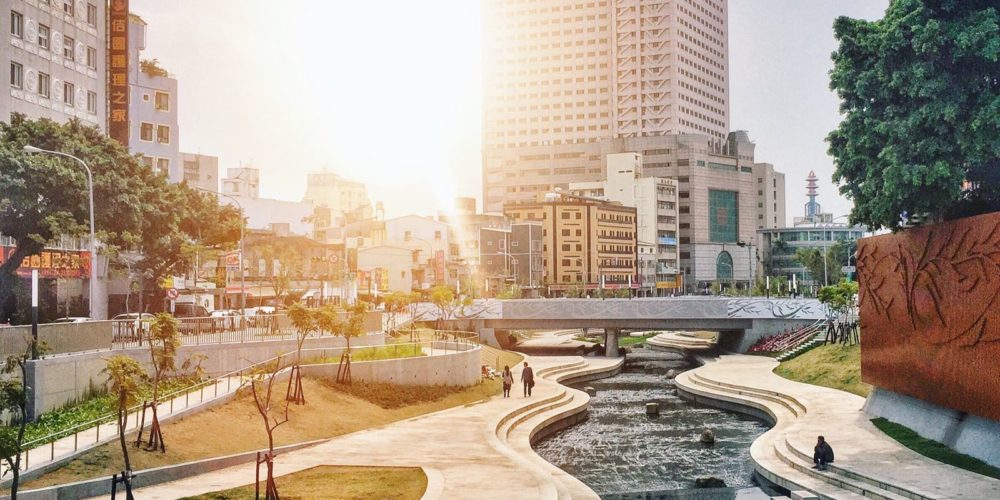 I actually visited this night market because it was within walking distance of my hotel (Fly Inn Hostel – great value –> check it out on booking.com) in Taichung and I’m really glad I checked it out. The main area of the market is on Yi Zhong Street, but also extends into some nearby side streets where there was quite a few good food options such as hand cut noodles. The main negative point about the market is that it’s open to through traffic so you’re constantly having to dodge cars and bikes!

I did some browsing first before visiting Fantasy Story, but couldn’t quite figure out what it was. So I walked there to find out for myself and still could quite get it! What is certain is that there are lots of cool looking buildings which are instagrammable and a Haritts Donuts which I really liked. But other than that… I’m not really sure. To be honest, I’d like people reading this to go there and get the low down so I can update this section!

Where to Stay in Taichung

Because Taichung is a little lower down the scale of modernity compared to Taipei, you generally find accommodation to be cheaper here. I stayed at the very respectable Fly Inn for $29.50 per night. Definitely recommended if you’re on a budget.

Not bad hey? Taichung is definitely worth spinning around for a few days. It’s not going to be your Taiwan highlight, but if you’re in Taiwan for a week of more, add Taichung into your itinerary.

My other Taiwan posts:

Taipei
Best Cafes in Taipei: I Tried Them All!
What to eat in Taipei – Pork, Rice and more Pork!